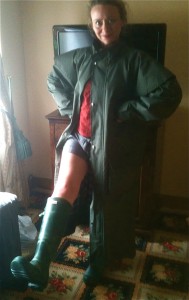 The Lygon Arms in Broadway is a beautiful coaching inn built from golden Cotswold stone and is rich in history and charm. The hotel has an international reputation for good cuisine and unashamed luxury. There are old beams, neatly trimmed hedges and a sumptuous indoor swimming pool and spa. They even have posh Hunters wellies and a Barbour raincoat hanging in every room – just in case the weather is bad.

However, there is nothing quite as disappointing as second rate service in a first rate hotel. We can’t speak for other guests, but personally we encountered rather amateurish and unprofessional service during our stay. When we arrived in late afternoon we asked for an evening menu and they apologised that they didn’t have one prepared yet. On returning to reception a couple of hours later the porter dismissively told us that if we wanted to see a menu we should “go outside and look at the one on the wall”. As a result we did go outside, and in the event were so annoyed that we decided to go and have dinner at the restaurant next door. Which was excellent, by the way.

When we arrived for breakfast the following morning Georgina and I were greeted by a rather senior-looking waiter who, after preparing a table for us, said “follow me ladies!” Being a large middle-aged man with a beard I was slightly taken aback at being addressed like this but passed it off as an amusing incident. We asked the same waiter for some glasses for the fruit juice. We waited patiently but he didn’t bring any, leaving us to use our own initiative to forage for some tumblers for ourselves.

When the same waiter took our breakfast order, he asked us to repeat almost every item twice, then read back many of the items incorrectly. When he bought our coffee he didn’t seem to know which was the decaff and which was the caff, forcing us to perform an impromptu coffee tasting before we could pour our beverages. He also forgot to put any milk on the table and we had to ask for some. When our hot breakfasts arrived, both orders were incorrect in some way. Missing fried items. Wrong type of eggs. We have never in our lives heard a waiter apologise so many times during the course of a single meal.

My plate was so hot that there were probably Health and Safety issues involved in putting it on the table in the first place. But despite the scorching heat rising from the plate, the scrambled eggs were somehow both cold and overcooked – something I would challenge even Heston Blumenthal to achieve under laboratory conditions. Meanwhile, the bacon was fatty and undercooked.

We have experienced poor service many times during our travels, but never in a 2 AA Rosette restaurant in a four star hotel with nightly room tariffs of around £225.