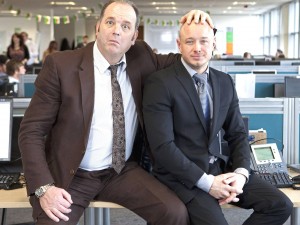 The high point of this programme was a puddle of sick in a car park. But more of that later.

I’d like, if I may, to use this review of The Call Centre (BBC3) partly as a platform for my own strongly held and mildly bigoted views on the cold calling industry in general.

It’s my personal belief that cold calling is the nastiest, most intrusive, invasive and immoral form of marketing on the planet Earth. It makes many people’s lives a living hell, particularly the old and vulnerable. My own elderly mother is now afraid to answer her own phone.

I believe that everyone involved in cold calling is a disgusting, self-hating swamp creature with no moral compass whatsoever. No person with anything resembling self respect would do the job. That’s why cold callers are among the most hated people in the UK, and that’s why cold calling should be against the law.

Let’s put that premise to an imaginary jury, shall we? I’ll begin by bringing to the witness stand Hayley Pearce, one of the featured characters in The Call Centre.

Here she comes  – bright orange fake tan, two inch long finger nails – her face caked in thick, badly applied make-up. I should remind the jury at this point that in episode one we first met Hayley on her hands and knees scrubbing her own vomit off the pavement.

She’d been out on the piss the night before and had turned up an hour late for work. Nice big close up of the vomit there, by the way.

Looks like Hayley is too hungover to give evidence, so let’s call to the stand Hayley’s boss, company CEO Nev Wilshere. In the first show we watched Nev having a meeting with one of his employees Kayleigh Davies.

She’d just split up with her boyfriend. Nev told her she’d been a “miserable bastard” at work recently, then revealed to her horror that he’d set up a speed dating evening, so that she could “get laid” as soon as possible. Failing that he’d at least find her someone who was a “good snogger.”

We then saw Nev drag Kayleigh out onto the sales floor where he loudly announced to the entire staff that he had a “desperate female” on his hands. He went on to ask a number of single men at random if they’d like to go out with her.

Delightful management style, Nev. Sensitive, caring, politically correct. Seriously, how is this man allowed to run a business in the UK?

All Kayleigh Davies would need to take Nev Wilshire to court for inappropriate behaviour in the workplace would be a DVD of episode one of The Call Centre. I’m sure the producers would be happy to oblige her with a copy. I hear they’re pretty strong on that sort of thing at the moment at the BBC.

And what’s Nev got to say in his defence? Just this: Nothing wrong with a bit of “friendly banter”, because it can “motivate everyone.” Looks like when the meteor landed, it missed a dinosaur.

I now draw to the court’s attention a clip from show one in which three male members of the call centre staff cruelly bully and intimidate the tea lady by hiding her tea bags and cutlery, then by blocking up her tea urn with something resembling chewing gum.

The poor girl eventually runs to see her line manager in floods of tears, accompanied by the raucous laughter of dozens of her moronic, slap-headed colleagues.

M’lud, I believe that all of this evidence proves beyond a shadow of a doubt that the people who ring you up at home while you’re having your dinner, and try and convince you they can get you a refund on your PPI insurance, are as loathsome, repugnant, annoying and unpleasant in their own private lives as they are when they’re on the phone to you.

They may dress up as bananas and cowboys and sing along to Mr Brightside by The Killers, but they’re monsters. The law should therefore protect us from them.

In my view, every single person who has ever cold called anyone should be arrested and charged under intrusion of privacy laws. The press are being made to pay for it and the cold calling industry should be next. Starting in Swansea, ideally.

No doubt many people will compare The Call Centre with The Office, but let’s not waste time pursuing that comparison. The Office moved television forward. It was a clever, innovative and brilliantly executed comedy series.

The Call Centre is the opposite of innovative. It’s cheap, lazy, dumbed down programme making that drags the BBC’s reputation as a broadcaster ever lower into the mud.

Apparently, there are now over a million people working in call centres in the UK. Perhaps when the government has finished culling the badgers, they might seriously consider thinning out the numbers of this lot.

No further witnesses. I rest my case.