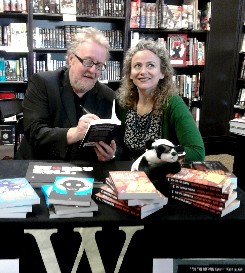 Sowerby and Luff in the press…

“One of the most popular podcasts on the planet!” LONDON LITE

“Georgina Sowerby and Brian Luff’s weekly comedy podcast, live from a pub in North London, has apparently been downloaded over three million times. It’s not a sketch show and it’s not stand-up comedy – so what is it, and why is it so popular? Well, Georgina and Brian talk fluent twaddle. That’s it. Like all the best kinds of reality radio, it’s the fizz between the couple that provides the entertainment. In a recent webisode: “Hens who live on volcanoes, and 18,000 mummified cats…” RADIO TIMES

For half a decade, Brian Luff and Georgina Sowerby have provided consistent fun comedy for the iPod generation and are a shining example of a pair that “get it”
THE GOOD PODCAST GUIDE  read more>>

“Blazing a trail for the new medium” DAILY MAIL