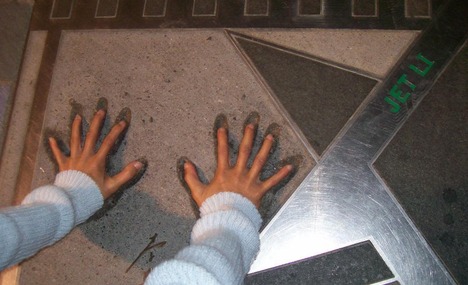 We took the Star Ferry across the harbour from Hong Kong to Kowloon and recorded a section of our podcast on the Avenue of Stars, which we stumbled upon purely by accident while looking for the ladies’ toilets. Georgina’s bladder is an extremely annoying beast. Even without any liquid intake whatsoever, it seems to require emptying about every 30 minutes, which can be very frustrating and leads to many silent moments of desperation.

The Avenue of Stars is on the Tsim Sha Tsui Promenade in Kowloon and it’s Hong Kong’s equivalent of the Grauman’s Chinese Theatre in Hollywood. The pavement’s strewn with the names and concrete hand prints of China’s top movie stars, and the whole place cost over 40 million Hong Kong Dollars to build.

Thus proving that even in this politically correct world, English people will never, ever grow tired of taking the piss out of Chinese names.