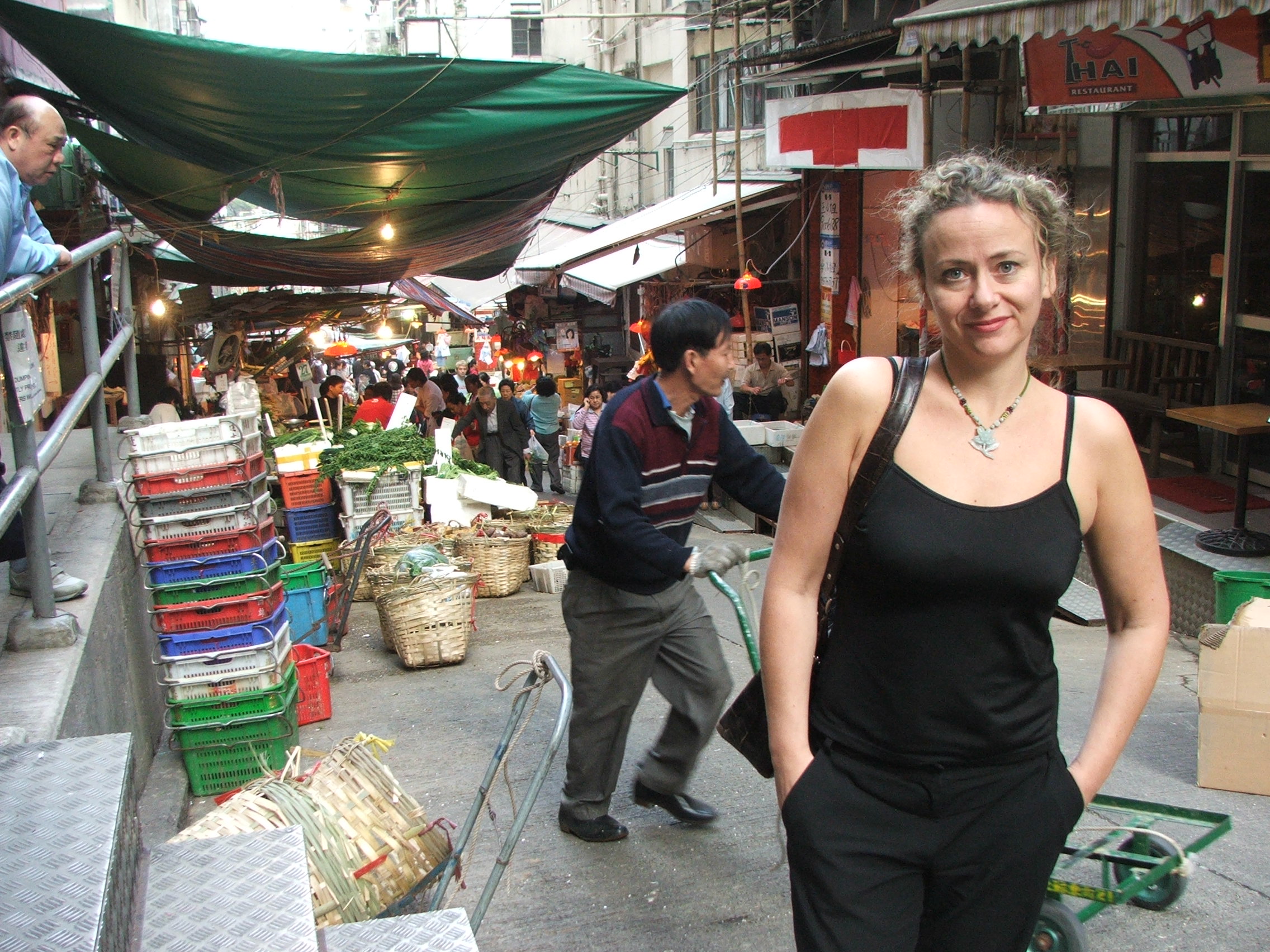 As we came in to land at Hong Kong Airport, we could immediately see the famous yellow smog of pollution which hangs permanently over the city.
“Isn’t this one of the world’s most dangerous airports?” asked Georgina.
“It used to be,” I said. “But they moved the runway to somewhere safer.”
“I hope they told this pilot where they’ve moved it to,” said Georgina.

Our luggage defied all laws of international air travel and arrived safely with us in Hong Kong, where we strolled delightedly into the fresh air outside the arrivals hall. A cool, spring-like breeze greeted us, and the temperature was a comfortable 70°F, with almost no humidity at all. There was oxygen in the air. Unlike Singapore we could actually breathe for ourselves without the use of any medical apparatus.

We jumped onto the Airport Express and after quickly passing through Tsing Li and Kowloon, arrived in the town centre twenty minutes later. We hailed a cab.
“L’hotel, Causeway Bay, please” we said to the taxi driver.
He stared at us as if we were from the Planet Zob.
“L’hotel?”
He clearly didn’t understand. We showed him our hotel booking form.
“Ah, L Hotel!” he said, and he shoved the cab into gear and headed across town.
French pronunciation appears to be frowned upon in Hong Kong, so L’hotel has always been known as L Hotel. How on earth could we possibly have known that? Had we not had that piece of paper, we might have been trying to locate L’hotel for days.

“Hong Kong is one of two special administrative regions of the People’s Republic of China, the other being Macau. It lies on the eastern side of the Pearl River Delta, bordering Guangdong province in the north and facing the South China Sea in the east.”
“Do you have to read that out loud?” snapped Georgina, as we headed towards Causeway Bay.
“I’m trying to educate myself,” I said. And I stubbornly continued to read aloud from the guidebook.
“Hong Kong was a crown colony of the United Kingdom from 1842 until the transfer of its sovereignty to the People’s Republic of China in 1997. China is still responsible for the territory’s defence and foreign affairs, while Hong Kong maintains its own legal system, police force, monetary system, and immigration policy.”

“Please tell me you have finished” said Georgina.
“But, I thought Hong Kong was now a part of China,” I said. “It turns out to only partly be a part of China.”
“Does that matter?” asked Georgina.
“Well, it’s just that for weeks I’ve been referring to this part of the trip as The Podcast That Ate China. I suppose that’s not strictly true, is it?”
“I’m sure no-one will notice” smiled Georgina. “And it is a very snappy title.”

The Podcast That Ate China arrived at L Hotel in the late afternoon of Monday 26th November 2007.
“Here’s your room key, madam” said the receptionist to Georgina. “You are on the 26th floor.”
Georgina went very pale. “Do you have any rooms lower down the building?” she asked. “Like, maybe, in the basement?”
“I’m sorry, madam,” said the receptionist. “That’s the only room we have available.”

We hauled our bags over to the elevators. Nothing. We pressed the button again. “Lifts very busy” said the man on the concierge desk.
“Thank you,” we said. “We’re not in a hurry.”

About 15 minutes later one of the lifts arrived, and we pressed the button for the 26th floor. The lift lurched skywards, leaving our stomachs behind on the ground floor. Georgina gulped.
“You’ll be fine” I said. “It could be worse. It could be the 27th floor.”
Georgina said nothing.

“Wow, you have to come and take a look at this!” I said, as I pulled back the blackout curtains in the room.
Georgina swallowed hard. “I’d rather not” she said.
“I know you don’t like heights, but you cannot stay in a hotel for a week and not look outside!” I said. “Look, solid glass. Double glazed glass. You cannot fall through it. You are safe. Perfectly safe. The bloody windows don’t even open! Shall I call reception and ask for a parachute?”
Georgina slowly edged her way around the walls towards the large panoramic window.
“Oh fuck!” she said, as she took in the dizzying view for the first time. From 26 floors up we could see the whole of central Hong Kong and across the harbour, the whole of the centre of Kowloon.
“I think I’ll have a little lie down,” said Georgina and she slumped onto the large double bed, her hands pressed firmly over her eyes.

Even having so recently visited Manhattan, we were staggered by the height and scale of the buildings in Hong Kong. The city has quite literally been built vertically, with even ordinary apartment buildings towering to 50 or 60 floors. Of course, this means that most people spend their entire lives waiting for lifts.

Night was falling fast across a city which contains four of the tallest skyscrapers on the planet, and an extraordinary light show was flickering into life. The room had an amazing view of the Bank of China Tower, which has attracted heated controversy in Hong Kong – its sharp angles said to cast “negative Feng Shui energy” into the heart of the financial district. We also overlooked the HSBC Building, which was built on the site of Hong Kong’s first ever skyscraper.

“Two International Finance Centre” is the tallest building in Hong Kong and the 7th tallest in the world, and at 88 floors it’s almost exactly the same height as the World Trade Center. They were actually half way through building this tower when 9/11 happened, which must have been a pretty traumatic time for the builders. We’d have had a terrific view of 2IFC from our hotel room, but someone had rather carelessly built a 50 story apartment block in the way.

I dragged myself away from the view, and shuffled slowly towards the bathroom in the twilight. Thud. I walked straight into a huge floor to ceiling mirror on the wall.
“Ow!” I yelped and went into the bathroom to study the bump on my nose.
“What are you doing?” called Georgina from the bed. There were a few seconds of silence, followed by another loud thud. Georgina came into the bathroom holding her forehead.
“Did you walk into the mirror too?” I asked.
“Yes,” she said, and we both began to laugh.
My BBC Health and Safety training kicked in immediately.
“That mirror is an accident waiting to happen!” I announced. “We must stick something on it!”
“Stick what on it?” said Georgina.
“I don’t know,” I said, “But we will find something.”
Five minutes later, using L Hotel complimentary toothpaste as glue, we had attached six pieces of L Hotel notepaper to the mirror. “That should do it!” I announced proudly. “We will never walk into that mirror again.”
“I wonder what the cleaners will make of it,” pondered Georgina.
“They must have seen it dozens of times before,” I assured her.

“I need a cigarette” said Georgina.
“Well, you can’t smoke in here!” I snapped. “You’ll have to go outside.”
“But that’s 26 floors down!”
“Then it’s an excellent time to give up smoking!” I said.

Georgina grabbed her duty free Marlboro and headed for the lift. 25 minutes later she came back.
“I can’t get a lift” she said. “Can’t I just have one cigarette in here?”
I pointed to the smoke alarms, and to the “No Smoking” sign which talked darkly of “severe penalties.”  “Georgina, do you really want to spend the next 20 years in a Hong Kong jail?”
She headed back towards the lift. An hour later she came back into the room.
“Did you enjoy your cigarette?” I asked.
“I fancy another one now” she replied.
“See you in a couple of hours,” I said.