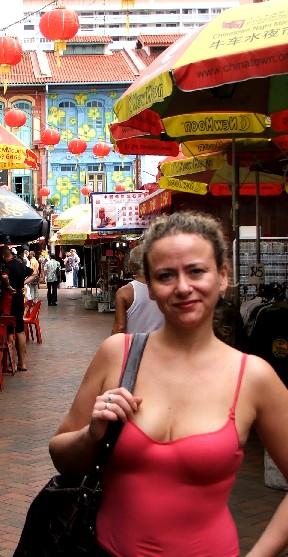 To our surprise, Chinatown in Singapore was adorned with Christmas decorations. Neither Georgina nor I had ever been in a hot country during the run up to the festive season, and it was truly bizarre to see Santa Claus and his reindeer sweltering in the tropical heat, or Frosty the Snowman set up next to a golden statue of Buddha.

We weaved our way through the colourful shops and stalls.
“You want to buy a nice silk shirt for Christmas?” said a tailor.
“No thanks,” I said determinedly.
“Come inside, I show you a nice shirt.”
“I really don’t want to buy a shirt, thank you,” I emphasised. But it was too late. I was an English tourist in Chinatown, and it was my job to buy a shirt. It was my absolute destiny to buy a shirt. To fight it was pointless.
“This shirt suits you,” he said, holding a shirt that didn’t suit me up to my chest. “Forty Singapore dollar.”
“No thank you.” I repeated.
“How much would you pay for this shirt?” said the tailor.
“I don’t know, twenty dollars?” I said. “Ten?”
“Sold,” he said. “You want a nice tie to go with that?”

“Why are you wearing that horrible shirt?” asked Georgina, clearly concerned that she’d only left me for about three minutes, and I’d already started spending our money on random items.
“I just bought it for ten dollars,” I said proudly.
“What was the other shirt like?” asked Georgina.
“Sorry?”
“Well, surely you must have got two shirts for that money!”

We decided to do the next section of the Singapore podcast while we were in Chinatown, but almost as soon as we began to record, the heavens opened and we experienced our first full-on tropical monsoon. Despite the weather, we kept going and the stereo sound of the rain beating down on the streets turned out to be one of the most dramatic recordings we made in Asia. At one point, while we were reading a listener’s email, you can hear us both jump clean out of our skins at a mighty crack of thunder.

Our favourite yuletide decoration in Singapore was a spectacular walk-in Nativity scene in Orchard Road. At 8pm every evening, fake snow, in the form of what appeared to be bubble bath foam, spread up and over the Nativity, causing much excitement to anyone under ten, and much hilarity for anyone over. Of course, the fake snow melted within a couple of minutes, but no-one seemed to care.
“Isn’t there something missing here?” I asked Georgina.
She counted off on her fingers. “Er, shepherds, sheep, wise men, Mary, Joseph…”
“There’s no baby Jesus,” I said.
Sure enough, the crib contained no Saviour, but in place of the Holy Child was a life-sized model of Lassie the Wonder Dog. In this modern climate, no city council wants to offend anyone, and there is an annoying dismissal of anything that represents any specific religion above another.
“I suppose it’s multi-denominational,” I said. “A dog that rescued mankind is considered a suitable substitute for the Lord Our God”.
“The Lord Our Dog,” said Georgina.
“Bark The Herald Angels Sing!” I said.
We left it there. Georgina and I were still not ready to embrace the Christmas spirit, it being too damned hot to walk more than five steps at a time.