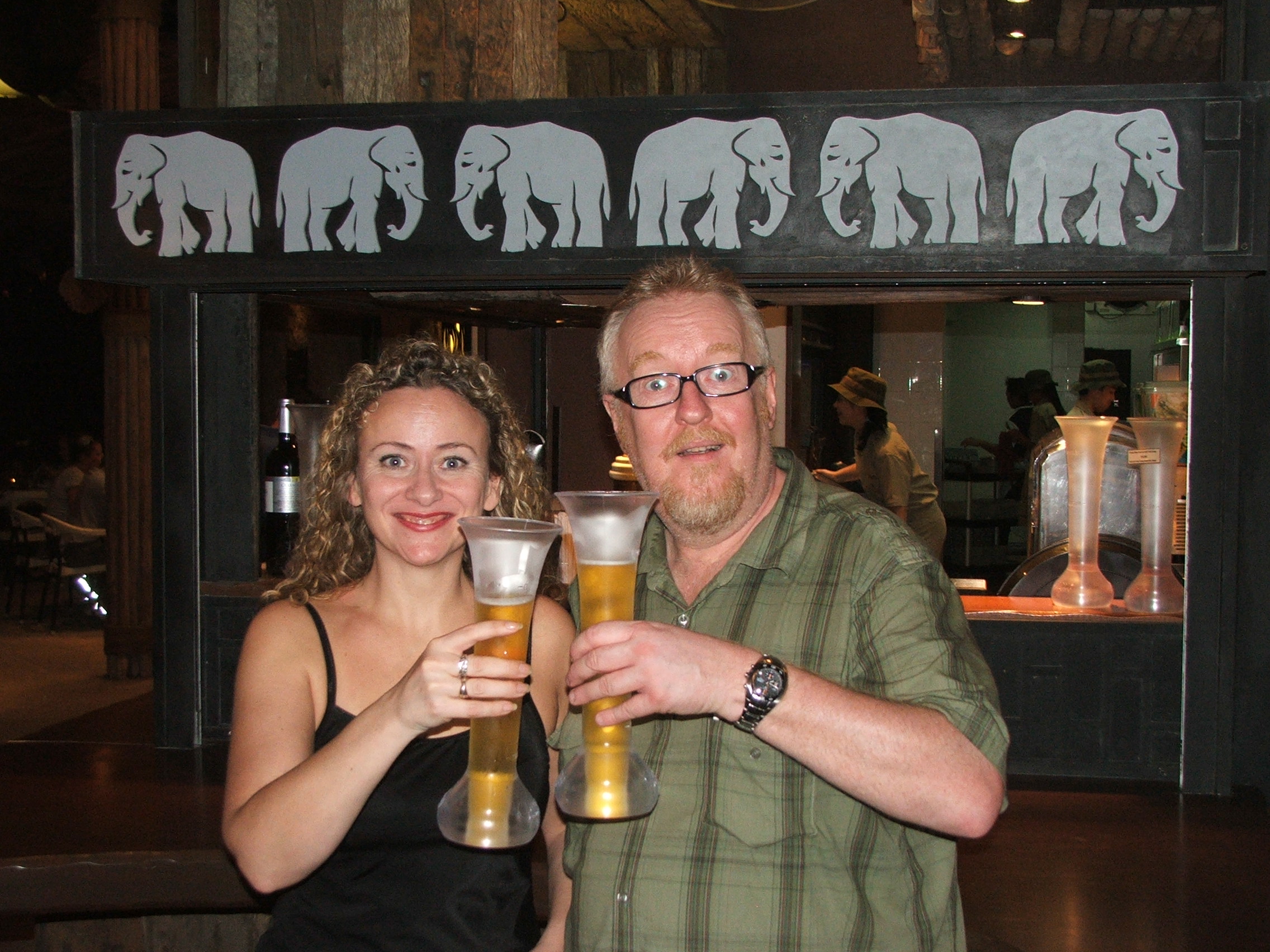 Since sunset in Singapore always takes place punctually at 7.30 pm, everyone always knows exactly when to show up at the Night Safari. We arrived promptly, in broad daylight, at 7.29 pm, and a minute later the sky was pitch black. I swear I heard a click as night fell. We ventured slowly into the darkness, and before long came upon a clearing in the jungle, in which was built a bar and a fast food restaurant called Bongo Burgers.

Night Safari is the world’s first wildlife park built solely for visits after dark – offering visitors “the unique experience of exploring wildlife in a tropical jungle at night”. If you think about it, it’s actually a very clever marketing idea, since around 90% of the animals in most zoos are nocturnal anyway, and are much more active after dusk.

We quickly made our way to the bar, where we sat and ordered a couple of tall glasses of Chang beer, which quickly lightened our mood, and it was with alcohol driven fervour that Georgina dared herself to go and touch a huge snake on the stage adjacent to the bar area.
“What type of snake is it?” she enquired of a keeper.
“Python, very dangerous,” came the terse response.
“May I stroke it?” Georgina asked, with no small amount of trepidation.  “Five dollar,” came the stock response.

Georgina came back to the bar. “I’m buggered if I’m spending thirty dollars to get in here, then another five dollars to do something I’m not convinced I want to do in the first place,” she snapped.
She ordered another beer.
“Five dollar,” said the barman.

We were told that before we set off on the safari, there was some kind of live performance, so we downed our Changs and, with pseudo African drums ringing in our ears, made our way towards the Creatures of the Night show.
We were astonished to discover in the next jungle clearing an entire open-air theatre, complete with auditorium, raked seating and a powerful lighting grid. I hit the record button on Roland as the show began with a classic voiceover intro.
“When the sun goes down… it gets dark. It becomes wet. It’s cold. It’s time for the Creatures of the Night.”

A blue spotlight faded up slowly on a rocky platform at the side of the stage, and a real-life wolf shuffled tentatively out of the wings. He sat for a while scratching himself, then attempted to make an early exit, at which point he was silently encouraged back onto his mark. There was no way that wolf was going to be allowed off that stage until he’d howled at the moon.

The wolf looked wistfully into the wings, then reluctantly lifted his head to the night sky and let out a half-hearted howl. He looked off stage again. Was that it? Could he go now? Nope, he was going to have to howl with a little more effort than that. He howled a bit louder, then coughed and trotted off for his meagre food reward. The audience applauded politely. Georgina got the giggles.

To be honest, that was the highlight of the show, and we said as much in our short review for the podcast as we filed out of the theatre 20 minutes later. We’d thought that the days of training animals to perform humiliating tricks for tourists were over. But we were wrong.

Now it was time for the safari. We piled into the back seat of the zebra-striped road train and waited for it to begin. It wasn’t long before we heard the voice of our guide come echoing through the loudspeakers.
“It’s a jungle out there,” she began, in an accent and style that was unlike anything we’d ever heard before. Kimberly, as we later discovered was her name, had a knack of placing a kind of exaggerated slow motion emphasis on the last two words in each sentence, in such a way that it sounded like she was voicing a porn film.
“Take a look at the rhino’s… skin,” she purred like Marylyn Monroe. “It may seem very rough and.. tough, but the rhino is still very… sensitive.”
I pointed Roland at the loudspeaker and the red record light flashed in the darkness. We had a feeling that sexy Kimberly was going to be one of the stars of our Singapore podcast.
“These pigs may look rather ugly to … you,” she teased, “But the female pigs find them rather… sexy.”
“Do you think this is the only safari in Asia to feature a Happy Ending?” I whispered to Georgina. But she was laying face down on the back seat, sobbing with laughter.