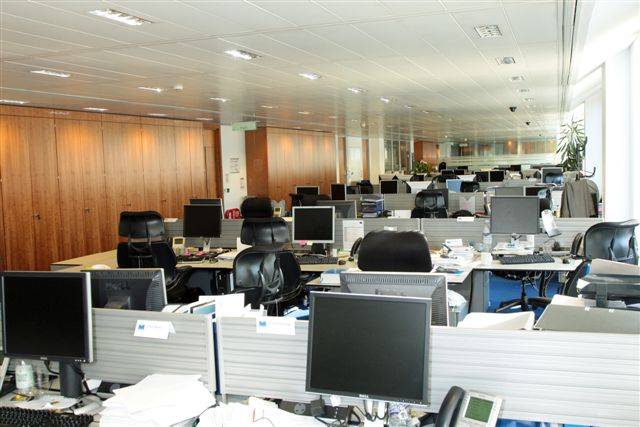 Do you have a dull office job? Do you ever scan through the recruitment web sites, and look longingly at such exciting-sounding roles as Insight Analyst, Media Planner, or Online Strategy Consultant?

They sound thrilling, don’t they? Well, I can set your mind at rest. Because all of these people actually do exactly the same as you do. They sit at their desks all day, bored out of their skulls, in the Office of the Future.

In the Office of the Future people amble into work at precisely 9.34am to immediately discover that someone has either removed the chair from their desk or swapped it for a broken one. They switch on their PC and login as quickly as they can (to make it look as if they’ve been there for ages). Then they slouch off to the kitchen or the canteen and get a chipped mug of instant coffee.

They return to their desk, read a whole load of cc’d emails that are nothing to do with their own particular job, look at their Facebook page and Hotmail for a while, then they go and get another cup of coffee. Maybe a Danish. If they’re lucky enough to smoke, it’s then time to put on their coat and go and stand outside in the rain for ten minutes.

Then they sit down at their desk again and look at their watch, which now reads 9.56am. They check their emails again, discover that no further messages have come in, then look out of the window for twenty minutes. Then they go to the toilet.

Occasionally, a colleague they vaguely know walks past their desk, and they nod to each other, sharing for an instant a kind of universally shared dispair. There is very little conversation. Everything happens silently through the wonder of electronic communication. Because this is the Office of the Future.

Once or twice a day a select group of colleagues scurry into a meeting room lit by uncomfortable flourescent lights and sit talking about things they’re not very interested in, while their less senior colleagues huddle outside the room wishing that they were in the meeting too and wondering what’s going on inside.

In the Office of the Future lunch is taken sitting at your desk. A vacuum-packed sandwich from Tescos, a packet of crisps, and a can of coke. Less considerate staff bring smelly food into the office and fill the workplace with the pungent, lingering smells of fish and chips, tandoori chicken or Chinese takeaway. But no-one complains.

As a welcome lunchtime break from work, employees stare at their PC screens and read the newspapers online or visit any web site they can find that isn’t blocked. If they are really, really desperate, they read the company intranet.

In the Office of the Future it doesn’t matter what your job is because your day is the same as everyone else’s day. The world is filled with miserable people slumped at desks staring blankly at PC screens. Look at them closely. They are dead behind the eyes. Because human beings were not designed for this. We are supposed to be running around in our pants throwing spears at mammoths, not checking emails and staring blankly out of the window.

Before the Office of the Future was invented people still had boring jobs but offices were noisy, lively places. People talked to each other. Papers shuffled. Rubber stamps stamped. Phones rang. Typewriters clattered. Colleagues went to the cafe or the pub at lunchtime. A tea lady called Dolly came around with a cup of tea and a biscuit at 4 o’clock.

And this wasn’t actually very long ago at all. Less than a generation. The future is not as far away as you think it is.

If someone’s phone rings in the Office of the Future it’s usually their mobile. They quickly answer it and then, for some reason, walk as far away from their desk as they possibly can – cowering in a dark corner and whispering into the mouthpiece like a Cold War spy.

In the Office of the Future many people work from home. Which means that there are often very few people there at all, leaving just a big room full of humming photocopiers and paper shredders. The Office of the Future has almost completely eliminated verbal communication and social interaction and soon it will eliminate people altogether. Which can only be a good thing.