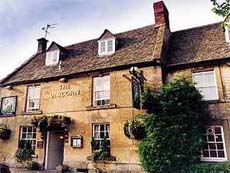 The Unicorn in Stow is located at the very heart of the Cotswolds, with Stratford upon Avon, Warwick Castle and Broadway a mere stone’s throw away. It’s a pretty building with warm, honey-coloured walls and a style of interior design that is perfectly in keeping with the age and proud history of the building. On the night I stayed at The Unicorn in February it was bitterly cold outside and there was a huge, roaring log fire in the hearth which added to the cosy, friendly feeling in the lounge bar.

My room was comfortable and well equipped, although the Wi-Fi only seemed to work in the lobby, which is very inconvenient if you happen to be traveling on business.

The bar manager poured me a pint of local Hook Norton bitter which turned out to be as cloudy as a foggy day in Baker Street. When I asked for it to be changed he looked a little puzzled, as if no-one had ever said anything like this before. Bar staff just don’t seem to have the hang of beer keeping anymore. In the old days an innkeeper would never have offered a customer the dregs from the end of a barrel – they’d have spotted it as soon as poured it. But then, the Unicorn did seem to be a little understaffed, with what appeared to be only a couple of people dashing back and forth between reception, bar and kitchen.

Dinner began with grilled goats cheese on beetroot with a splash of balsamic. A simple but tasty starter, if a little overpriced. The main course of pork something was more than a little congealed when it arrived at the table, and tasted faintly reminiscent of a Tesco’s Finest ready meal I had once. It was served with a generous pile of chunky oven chips, and a side order of cauliflower, green beans and carrots which were almost raw. But then I’m told that some people prefer their vegetables like that. The final touch was a wobbly table – one of its legs precariously wedged on a soggy napkin.

Stow on the Wold is one of the most beautiful villages in the UK, and The Unicorn should be a delightful place to stay. But like so many small hotels of its kind in Britain, it suffers from culinary corner-cutting and a sad lack of attention to detail. 2/5