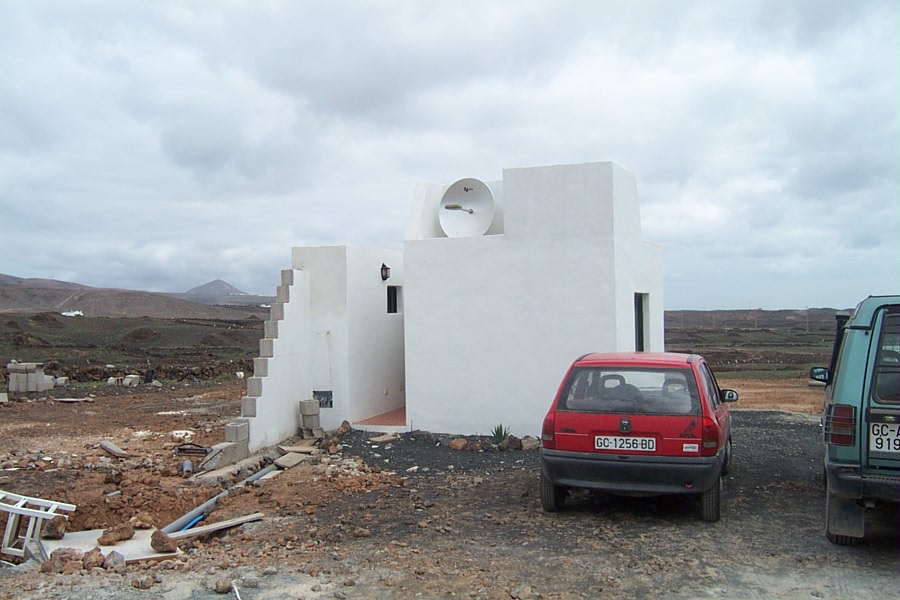 Ever since my hospital broadcasting days I’ve clearly had something of an obsession with radio. Even when Georgina and I went on holiday to Lanzarote, when we first met, I somehow become embroiled with that island’s curious little radio station.

One evening, we were sitting in the bar of our hotel, listening to the strangled stylings of a local karaoke singer, who we shall call Reg.  He was an ex-pat Brit who had escaped the hurly-burly of being an out of work musician in London, to become an out of work musician in the Canary Islands. After the gig, we got chatting with Reg at the bar, and he invited us to visit his “studio” the next day.
I’ve never been one to spend my holidays slumped next to a swimming pool. Georgina can remain inert for long periods of time, like a sloth on Night Nurse, but I can never keep still for longer than 5 minutes. The idea of relaxing next to a pool for 14 days is a form of torture for me. It was Georgina’s job to soak up the sun, mine to wear a knotted handkerchief on my head and abhor the heat. Close as we are, in many ways Georgina and I are the proverbial chalk and cheese.

The following morning I left Georgina snoozing on a sun lounger, jumped into our hire car, and bumbled off into town. Reg had converted most of his holiday bungalow into a recording studio and was scraping a living writing advertising jingles and emailing them to London. I’m always keen to find shared areas of interest with my drinking buddies, so I scoured my brain to try and find some connection between myself and the music industry.

The only thing I could think of was my own slim involvement in the writing of the theme song for my Channel 4 series, Pets. The subtitle of the series had been “Every dog has its day, but this isn’t it”, so I had suggested to the composers that they write a song called “This Is My Day”.  Andrew scribbled some lyrics, and the boys quickly came up with a brilliant pop track – not dissimilar to the theme music to Friends.

“I wrote a pop song once,” I said proudly to Reg, in the hope of impressing my new musician pal. “Wow,” he said, “What was it called?”
5 minutes later we had downloaded “This Is My Day” from the Pets website and were listening to it over a beer in Reg’s back garden. The track’s sunny, happy atmosphere sounded great in the hot Canaries sun, and Reg suddenly got very excited.
“You could get a big summer hit with this in Lanzarote,” he said. “Come on, I’ll drive you up to the radio station!”
“Can we pick up Georgina on the way?” I asked “Sure,” said Reg.

UK Away FM was the local English language radio station for Lanzarote and Fuerteventura. “Where exactly is the studio?” Georgina and I asked, as Reg’s ancient car turned off road, and began to drive over increasingly large rocks and boulders.
“It’s up there” he said, and he pointed ahead towards a huge towering volcano. “The views are fantastic,” he said, “You can see the entire island from up there!” Georgina went very pale. “I’m sorry, I really don’t do heights,” she said.

I’d once tried to take Georgina to a press event in a restaurant at the top of a very tall building in London, and she had actually passed up the opportunity of free food and drink, rather than be in such a high place. She was genuinely terrified at the thought of it. It was like a scene from Alfred Hitchcock’s Vertigo.
“Just drop me here”, she said and leapt out of the car.  “A radio studio on a volcano?” I said to Reg. “Isn’t that dangerous?”
“It’s a dormant volcano,” he said and somehow that made everything normal again.

Half an hour later we pulled up outside a small white building on a sharply inclined red soil slope. “Why does it have to be up so high?” I asked, almost gasping for oxygen. In reply, Reg pointed to a tiny radio transmitter on the roof of the building. As soon as we were inside, he introduced me to the Station Manager and Head of Programming, Phil.

Phil was a craggy-faced go-getter who got up at the crack of dawn every morning to present the breakfast show. He then spent most of the day bombing around Lanzarote and Fuerteventura selling radio advertising to small local businesses. Then he raced back to the studio and did the drivetime show. The man was practically a one man radio station and he seemed to be making a pretty good living from it. I think Phil may have inspired me more than I know during the formative months of Comedy 365, a few short months later.
Reg waved the CD he’d burned of This Is My Day.  “I have in my hand,” he said to Phil, “the biggest holiday hit this island has ever heard!”
Phil slid the disc into a CD player. “This is great,” he said. “Can we play it?”
“I guess so,” I said, “As long as you pay all the usual royalties to the guys that wrote it. Including me.”  “Oh we don’t pay royalties,” smiled Phil. “That’s how we stay in business.”  “You’re pirates?”
“Of course we’re pirates,” he said. “Would you pay royalties if you ran a radio station in the middle of nowhere?”

I rang London and spoke to the guys who had written the song and to Stacey Smith, who had recorded it. The track had never had any radio play since appearing in the Channel 4 show, and they all seemed think they had nothing to lose.
“Where’s the radio station again?” asked Stacey.
“On top of a volcano in Lanzarote” I said.

An hour later, while Reg and I were driving back to my hotel, he switched on the car radio. Phil was on the air, and he was already playing This Is My Day. Georgina and I were in Lanzarote for another 10 days or so, and every single time we switched on the local radio during that time, they seemed to be playing This is My Day. I was the only record plugger on the planet to get a thousand radio plays and not earn a single buggering penny from it. But that track became the soundtrack to a great holiday. Not that Georgina saw very much of me. I was way too busy playing with my radio chums.