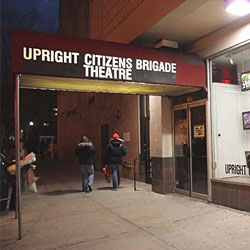 We couldn’t go to New York without seeing some live comedy and as much as we enjoy watching stand-up, we wanted to see a gig that was similar to our own show in London Sketch Club. So, we jumped on the L train from Brooklyn and headed towards Chelsea on the West Side.

The buskers on the New York subway are so good that people don’t hurry past them like they do in London, they actually stop to listen to them. Then they stand and applaud afterwards. You see entire horn sections, string sections and the occasional drum kit. You see PA systems, microphone stands, and mixing desks. If someone asks you how to get to Carnegie Hall, tell them not to bother. Just go down the New York Subway.

We’d heard good things about a sketch show and character comedy night in Chelsea, so we showed up at the Upright Citizens Brigade Theatre at West 26th Street, and booked to see the 7 o’clock show Shameless, which featured a female character comedian called Eliza Skinner. We caught up with Eliza at the bar afterwards, and she described it as “a show about people you don’t like, but have to love.”

Eliza puts raw, repellent desperation front and centre, both in her scriptwriting and in her performance – wrenching humour from awkward circumstances, and cringe-inducing comments. We asked her if it was more difficult to break through with a character show, as opposed to a stand-up act, and she told us that there are now more and more clubs in New York which cater for that style of comedy.

The Upright Citizens Brigade Theatre, apart from being a name which is almost impossible to remember, presents four or five shows a night, with a different audience coming in for each show. You can buy a ticket for the whole evening, or you can just pay around $10 to see one of the shows. There’s nothing like that on the London comedy circuit, but it’s how venues operate at the Edinburgh Festival, so it was something Georgina and I were very familiar with. The UCB runs like the Edinburgh Fringe all year round, seven nights a week, and that’s something we found really exciting.

We interviewed Eliza for our podcast, then we went back into the theatre to watch the second gig of the night – a one-man show featuring an LA comedy actor called Will Franken. This lanky, long-haired comedian’s genius resides in his excellent sense of the absurd, and a total disdain for any kind of political correctness. Will is devastating as he skewers liberals and bigoted right wing fanatics in equal measure. He plays activists, Christians and homophobes, and often walks a precarious tightrope between good and bad taste.

Will finished his show with a scene about a terrorist with a bomb, who inadvertently finds himself on a plane that is going to crash anyway, due to engine problems. It was a very strange experience, sitting not four miles from Ground Zero, and watching a sketch about a terrorist on a plane with an audience of New Yorkers.
“He’s performed that sketch many times in Los Angeles,” one of the audience said to us afterwards. “But I think he may need to tone it down a little for New York.”
We loved Will’s show, and he has since become a regular contributor to our podcast.