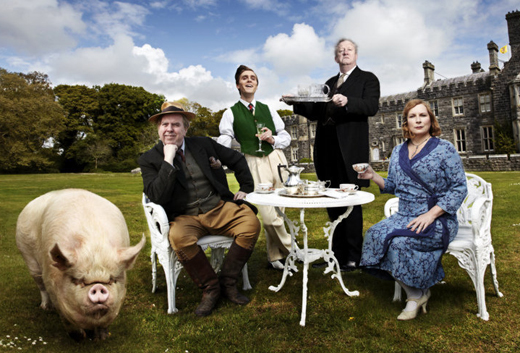 When the brilliant and inspired Stephen Fry and Hugh Laurie did PG Wodehouse’s “Jeeves & Wooster” in the 1990’s it was a pure joy. Because they didn’t appear to be acting. They seemed to somehow miraculously become those two characters. You couldn’t see the strings.

The complete opposite is true of the BBC’s new six-part adaptation of PG Wodehouse’s Blandings Castle stories. As Lord Emsworth, Timothy Spall does little but put on a posh voice and dig in, like a knackered old repertory company actor playing Toad of Toad Hall for the umpteenth time, in yet another tatty production of Wind in the Willows.

As Emsworth’s sister Connie, Jennifer Saunders looks equally bored and uninterested, as if she’s hurriedly learned the lines for a quickie PG Wodehouse sketch in an episode of French & Saunders.

Worst of all is Jack Farthing as the idiot son Freddie. His upper class accent is about as convincing as a first year American drama student auditioning to play all the Hugh Laurie parts in a bad remake of Blackadder.

Farthing’s on-screen strategy appears to be to pull as many stupid grimaces as possible, bump into the furniture, fall over, and hope for the best.

The only member of the company who isn’t dismally miscast is Mark Williams, who’s Beach the Butler is neatly underplayed, nicely observed, and completely believable – standing head and shoulders above the surrounding gaggle of tiresome, stereotyped, phone-it-in actors.

The pig is good. Very good. His flat, upturned nose can’t help but put me in mind of Kevin Bacon (No pun intended. A genuine, physical similarity that is undoubtedly worth pointing out.)

Blandings’ early evening, weekend time slot makes me wonder just exactly who the target audience are intended to be. The poor slapstick and semi-Pantomine style appear to be aimed at a younger audience. Chuckle Brothers meets Downton Abbey? Yet that age group’s unfamiliarity with the Wodehouse genre would surely only lead to utter confusion and bewilderment. I know Wodehouse pretty well and it leaves me cold.

The only thing that made me laugh during the whole of the first two episodes was the thought of a couple of streetwise urban teenagers accidentally switching on to Blandings and fruitlessly trying to work out who these people were, and what the fuck they were on about. I will not be returning a third time to this particular crumbling pile.