When the brilliant and inspired Stephen Fry and Hugh Laurie did PG Wodehouse’s “Jeeves & Wooster” in the 1990’s it was a pure joy. Because they didn’t appear to be acting. They seemed to somehow miraculously become those two characters. You couldn’t see the strings.

The complete opposite is true of the BBC’s new six-part adaptation of PG Wodehouse’s Blandings Castle stories. As Lord Emsworth, Timothy Spall does little but put on a posh voice and dig in, like a knackered old repertory company actor playing Toad of Toad Hall for the umpteenth time, in yet another tatty production of Wind in the Willows.

As Emsworth’s sister Connie, Jennifer Saunders looks equally bored and uninterested, as if she’s hurriedly learned the lines for a quickie PG Wodehouse sketch in an episode of French & Saunders.

Worst of all is Jack Farthing as the idiot son Freddie. His upper class accent is about as convincing as a first year American drama student auditioning to play all the Hugh Laurie parts in a bad remake of Blackadder.

Farthing’s on-screen strategy appears to be to pull as many stupid grimaces as possible, bump into the furniture, fall over, and hope for the best.

The only member of the company who isn’t dismally miscast is Mark Williams, who’s Beach the Butler is neatly underplayed, nicely observed, and completely believable – standing head and shoulders above the surrounding gaggle of tiresome, stereotyped, phone-it-in actors.

The pig is good. Very good. His flat, upturned nose can’t help but put me in mind of Kevin Bacon (No pun intended. A genuine, physical similarity that is undoubtedly worth pointing out.)

Blandings’ early evening, weekend time slot makes me wonder just exactly who the target audience are intended to be. The poor slapstick and semi-Pantomine style appear to be aimed at a younger audience. Chuckle Brothers meets Downton Abbey? Yet that age group’s unfamiliarity with the Wodehouse genre would surely only lead to utter confusion and bewilderment. I know Wodehouse pretty well and it leaves me cold.

The only thing that made me laugh during the whole of the first two episodes was the thought of a couple of streetwise urban teenagers accidentally switching on to Blandings and fruitlessly trying to work out who these people were, and what the fuck they were on about. I will not be returning a third time to this particular crumbling pile.

Fat Chance’s legendary technical manager Bennsy stands in for Georgina while she’s away, and he and the Luffster down a few beers and chat about their adventures in the TV industry. Bit of an oddity this one, and a must for all hard core Sowerby and Luff fans.

We have always lived in a nanny state, and poor old Auntie Beeb is the most old fashioned and protective of all our national nannies.

Following the disastrous events of the last few months, the BBC is quite literally frightened of its own shadow, and the sight of the corporation desperately over-compensating for its Health & Safety misdemeanors, day after painful day, is quite frankly a pitiful spectacle.

Maybe that’s one of the reasons the corporation currently seems so utterly obsessed with one particular on-screen health warning: “This report may contain some flash photography.”

Newsreaders say this because flashing lights, at the very precise frequency of 25Hz, can on rare occasions trigger epilepsy. About 5% of people with epilepsy have been diagnosed with the photo-sensitive variety of the condition and that amounts to about 2,250 UK residents.

So let’s be precise about this. In the unlikely event that the BBC records a group of paparazzi photographers collectively activating their flash bulbs at a frequency of exactly 25Hz, and one of that tiny sample of viewers happen to be watching, while sitting at exactly the right distance from their TV, in perfect lighting conditions, then there is a slim chance that that viewer might have an epileptic attack.

I’ll bet if you put fifty photographers in a laboratory for six weeks, and asked them to flash their cameras for 12 hours a day, they would not be able to maintain that exact frequency, even for a few fleeting seconds.

Forgive me if I’m being a little harsh here, or coming across as uncaring, but if I was one of that tiny group of sufferers, I would not need Fiona Bruce to continually remind me about the dangers of photo-sensitive epilepsy. In fact I’m sure I would be extremely careful while watching the television, particularly news bulletins and movie premieres.

Because of the potential risks, I suspect I’d avoid watching TV news altogether and consume my current affairs via the excellent and informative medium of radio. Furthermore, every time I heard one of those annoying warnings I would be terribly embarrassed, mortified in fact, feeling that I was being somehow picked upon, bullied even, by the BBC’s over-zealous, nit picking obsession with my medical condition.

If the BBC continues to issue warnings about anything that just might be dangerous to our health, perhaps it won’t be long before weather bulletins are preceded by disclaimers stating that if we insist on leaving our homes and engaging with the weather we are at risk of suffering from sunburn, wind burn, frost bite, falling trees or lightning strikes.

Personally I’d like to see an announcement at the beginning of Strictly Come Dancing, warning that some viewers may experience a little bit of sick rising at the back of their throats while watching Lisa Riley.

We’re famous for queuing in this country. We as a nation have stood proudly in queues for centuries. Our grandparents queued for rations during the Blitz, our fathers queued noisily outside football stadiums, and our mothers queued patiently to go to the toilet in Marks & Spencer. I, myself, am descended from a long line of queuers. However, this great British tradition is now on its last legs.

I often arrive at Finsbury Park Bus Station at the busiest time of day, usually to discover a long line of commuters waiting for the W3 bus. It’s not unusual for there to be 100 people or more politely waiting in line. And every night, when the bus arrives and opens its doors, at least six people walk up to the bus from the opposite direction to the queue, and calmly step onto the bus ahead of everyone else. Indeed, many passengers actually step out of the way in order to make room for them.

No-one says anything. No-one bats an eyelid. There is never a hint of confrontation. And this, of course, is because there is now such a sinister, underlying atmosphere of intimidation and violence on the streets of the capital, that normal law-abiding passengers would now consider it to be a dangerous, even life-threatening act, to stand in the way of a queue jumper. In London it’s safest to assume that most people are carrying knives, and the rest are packing unlicensed handguns. Tell someone to get to the back of the queue in Finsbury Park and you could quite literally end up dead.

Many queue jumpers are what you might expect: Young, arrogant, quietly insolent and wearing a hoodie pulled up over their heads. But there is now a new breed of queue jumper. Respectable, middle-aged, sometimes even elderly. An insidious new underclass of weather-beaten, bitter Londoners who have suddenly realised that they can cynically take advantage of the lack of confrontation at the head of queues, and effortlessly save themselves the trouble of going to the back of the line. These wrinkly renegades seem to have adopted the good old-fashioned attitude of “If you can’t beat them, join them.”

So, why don’t Transport for London do something about this? Signs at bus stops? Posters on the tube? Official sounding Tannoy announcements?

Even better, why don’t bus drivers simply switch off their engines until queue jumpers get off the bus? Like they do if someone tries to get on without paying. The reason is simple. It’s because Transport for London staff don’t respect their passengers either. If they did, they wouldn’t have gone on strike on Boxing Day.

The words “respect” and “disrespect” are frequently banded about nowadays. The problem is that many people no longer have any idea what these words mean. The utter contempt shown to fellow travelers by serial queue jumpers on London Transport is proof of this.

Whether you call it butting, barging, skipping, ditching, or pushing in, like throwing litter, or allowing your dog to foul the pavement, queue jumping should be made a criminal offence in the United Kingdom – punishable by a fine of at least £1000. Because queue jumping is as ugly a form of personal intimidation as threatening behavior or abusive language.

And London Mayor Boris Johnson’s contribution to this problem? He has re-introduced a bus with an open platform on the back, which will make it even easier to jump the queue ahead of your fellow passengers. Nice one Boris. Perhaps he’s contemplating turning queue jumping into an Olympic sport? 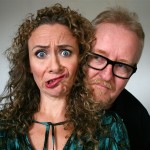 Merry Christmas and a Happy New Year from Brian & Georgina. Click on the link below to listen to our lovely musical Christmas card.