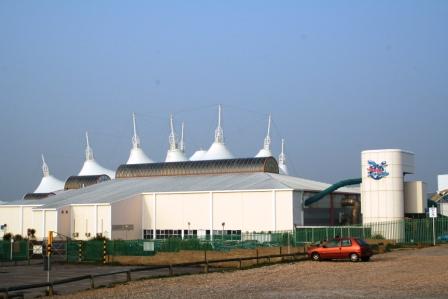 After returning from our Hong Kong trip, (while writing “Sex Tips for Pandas”), we became more and more addicted to suitcases and hotel rooms. So we decided it was time we should take the podcast on the road again.  Clearly, what we needed to do was to start talking about what was going on in the outside world.

So, we scoured the listings magazines and newspapers for the most cringe-making and kitsch event we could find, and eventually plumped for a 1960’s weekend at Butlin’s in Bognor Regis. Believe me, until you’ve seen a seventy-five year old woman in an electric wheelchair, dressed as Cilla Black, you haven’t lived.  We drank weak lager out of plastic glasses and watched a succession of overweight, grey haired men in matching gold lamé suits, strum their way through songs that had propelled them into the pop charts forty years earlier. Then we recorded a podcast about it.  It was a mixture of genuine review and surreal exaggeration, and it got a great response. At one point I suggested that Georgina had disappeared around the back of the Bob the Builder house at Butlin’s with all five members of Dave Dee, Dozy, Beaky, Mick and Tich – and had “pleased them all in special ways.”

One night, Georgina and I wandered into one of the Butlin’s music venues and caught the end of a performance by a legendary band called The Zombies. I pompously explained to Georgina that this was, of course, not the 1960’s line up of the group, and that the band could only achieve the genuine sound of The Zombies if graced by the unique voice of the original lead singer Colin Blunstone. At which point a woman sitting at the table in front of us turned around and announced “This is Colin Blunstone.”   “I think you’ll find it isn’t,” I smiled confidently.

In that week’s podcast we offered a Butlin’s teabag as a prize for anyone who could tell us if Colin Blunstone was currently appearing as Colin Blunstone in the UK tour of The Zombies, and one of the listeners sent us a link to the official Colin Blunstone website, featuring a photograph of him singing at Butlin’s that very Saturday night. We asked the listener for his address, so that we could send him the teabag, but he never replied. We still have the teabag.