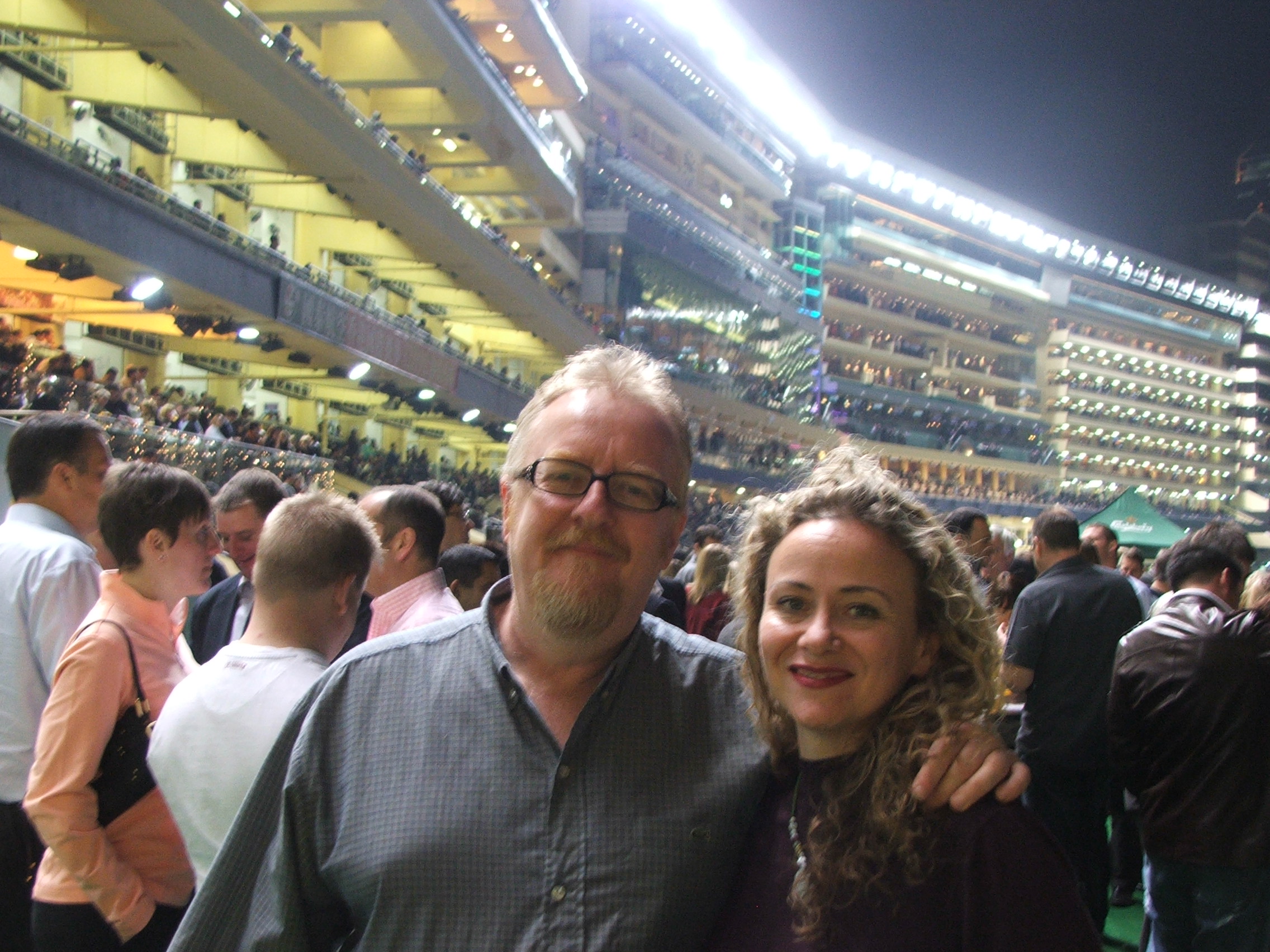 The Royal Hong Kong Jockey Club is home to one of the most spectacular race courses in the world, and they have floodlit racing every Wednesday night.
“We simply have to go to the races,” Georgina said over breakfast the following morning.
“But, we don’t gamble,” I said.
“For the experience,” she said. “And anyway, I’m told there’s a very nice Chinese restaurant with unlimited beer during the races.”
“What time does it start?” I said.

That evening we got a cab to Happy Valley, and we were soon ensconced at a table overlooking the finish, with a delicious selection of authentic Peking dishes spread out in front of us.  “What do you fancy in the next race?” I asked.
Georgina studied the form. “I think I’m going to choose my horses based on the colours and designs of the jockeys’ shirts,” she said. “How are you going to choose yours?”
“I might be a little more scientific than that,” I said pompously, and I flicked through the Hong Kong evening paper until I found the names of the city’s top racing tipsters.
“I’m going for Wong’s Favourite,” I said. “All the experts say it’s going to romp it.”
“I’m backing Natural Echo,” said Georgina “because his jockey’s wearing such a nice stripy red shirt.”  “How much do you want to bet?” I said.
“20 dollars,” said Georgina, and with a flourish she slapped a 20 dollar note on the table.
“That’s only about £1.20,” I said. “Surely you could be a bit more adventurous than that. It all goes to charity, you know.”
“Charity?”
“Oh yes, it’s not like in the UK. The Hong Kong Jockey Club is a non-profit, charitable organisation,” I said. “Look, it says here in this leaflet: In 1955, the club formally decided to devote its surplus each year to charity and community projects.”
“That’s a great idea” said Georgina.
“The Club aims to bring a better quality of life to the people of Hong Kong,” I read “and immediate relief to those most in need.” “Maybe they give some of it to the pandas!” said Georgina.  “So, how much are you going to bet? I asked.
“20 dollars,” she said.

As we sat down at our table, we’d been given a leaflet, warning us about the evils of gambling, which seemed an odd thing to do at a race track.
“Gambling frequently leads to relationship problems, financial difficulties, and a range of emotional disorders,” it said.
“You sure you want to risk it?” I asked Georgina.
“20 dollars,” she said.
I read the last bit of the leaflet. It said that you should “Set and stick to a budget, only gamble what you can afford to lose, and that you should never borrow to gamble.”
At that moment, I opened my wallet and discovered that I’d completely run out of Hong Kong Dollars.
“Can you lend me a few bucks, Georgina?” I asked.
“You should never borrow to gamble,” she said.
We went and placed our paltry bets at the little window in the restaurant. Then we tucked into our bean sprouts and noodles, and waited for the first race to start.

“The winner is Natural Echo!” said the commentator a few minutes later.
Georgina was magnanimous in victory.
“What happened to your horse?” she asked.
“Oh, my horse was that really fast horse that led all the way around the track and was passed in the last ten yards by Natural Fucking Echo!” I said.
“Nobody likes a bad loser,” said Georgina.
“What are you backing in the next race?” I asked. “I’m quitting while I’m ahead,” said Georgina. “After one race?” I squealed. “You should set and stick to a budget,” Georgina quoted back at me.
“And what was your budget?” I asked.
“20 dollars,” smiled Georgina.
Determined not to be outdone, I scoured the newspaper, and discovered that all six tipsters were going for the same horse in the next race. I dashed over to the betting window and put twenty dollars on Lightning Speed. I’ve never backed a winning horse in my life, so the actual amount of the bet was immaterial. It was the winning that counted. More importantly, it was not being outdone by Georgina.
Georgina counted her winnings and we walked down the stairs to trackside to watch the next race. There was a whole lot more atmosphere outside in the open, and the place was packed with both tourists and serious local punters. We stood right next to the finishing post, where the floodlights gave the track an exciting, almost theatrical atmosphere.
As the second race started the noise from the massive crowd was deafening. Lightning Speed went into the lead almost immediately.
“Go on, number nine, go on my son!”
You simply would not believe how enthusiastic one man could get over a £1.20 bet.
“Go on, number nine, Go on, Lightning Speed!”

A huge roar went up as the horses flew past the winning post just yards away from us. We had absolutely no idea which one had triumphed.
“Did you see who won?” I asked a nearby Chinese punter who looked like he knew what he was doing.
“Number six,” he said.
“Bugger,” I said.

“You’re supposed to tear up your betting slip and throw the little pieces up in the air,” said Georgina. “It’s traditional.”
I rummaged around in my pocket and took out the betting slip. I held it up in the air and prepared to tear it to shreds.
“The winner of the second race is number 9, Lightning Speed,” said the announcer.
“Yeeeeee haaahhhhh!” I screamed, and threw the ticket in the air.
“You’d better go and find that,” said Georgina. “You don’t want to go home without your winnings.”
Georgina and I had only backed two horses in two races and, as if by magic, we’d both managed to get a winner in each. It really was that kind of a trip. The sights and sounds of the Hong Kong Jockey Club will stay with us both for years to come, and will definitely be one of our most vivid memories when we look back on our trip to the Far East.