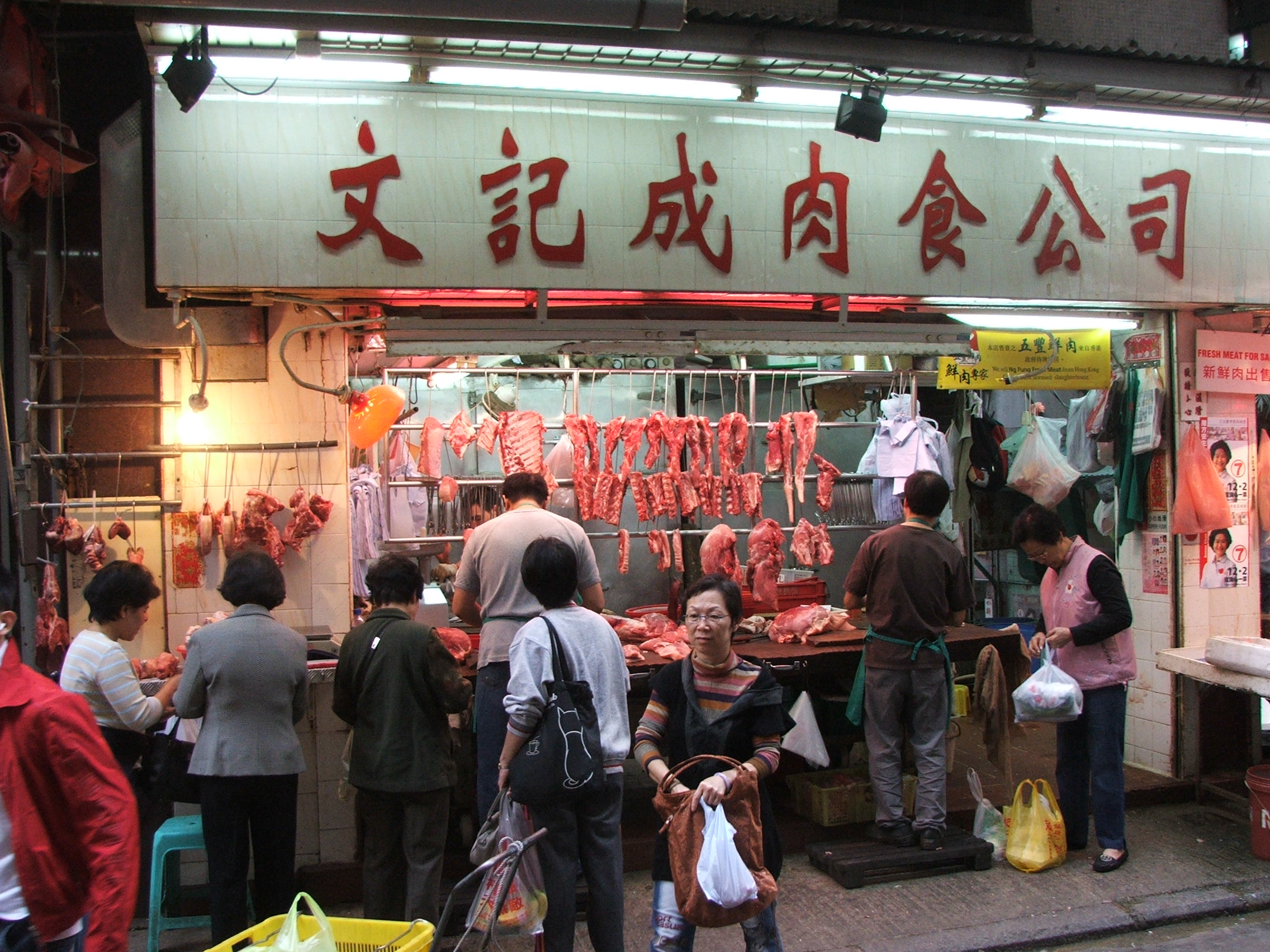 Following our Hong Kong tourist map carefully, we climbed up Lok Ku Road through the tumbledown “stone ladder” streets and markets of the “Mid-Levels”. This part of Hong Kong appears to have been built almost entirely at a steep angle, and most of the shops and stalls seem to feature exotic sea creatures awaiting execution. Here you can choose your dinner based on how fast it can swim. We snapped many photos of Georgina giving the Last Rights to various lobsters, shrimp and crabs. After much semi-vertical walking, we gave up and climbed onto the Central-Mid-Levels escalator, arriving in the SoHo district moments later.

SoHo’s crammed with shops, restaurants, bars, nightclubs and art galleries, and the most famous street is probably Hollywood Road, which is where all the antique shops are. In the window of one antique shop in Hollywood Road was the largest and most intricately carved elephant’s tusk we had ever seen.
“I thought it was illegal to sell ivory” said Georgina.
“Maybe what’s why there’s a sign in the window which reads “NO PHOTO” I said.
Georgina and I were disgusted at the amount of ivory that was on sale in Hollywood Road. You’d think that such a modern, civilized city as Hong Kong would take a more responsible view about what’s sold in its antique shops.
For a while we tried following the “Sun Yat-Sen Historical Trail” through “Sixteen points of historical interest”, but we quickly realised that most of the ancient sites on the tour have long been bulldozed and replaced by concrete skyscrapers. The architect who decided to build a multi-story residential complex alongside the Man Mo Temple should be put to death along with those lobsters.

The most spectacular view of Hong Kong is from The Peak, and it’s way too high to climb on foot, so we took the Peak Tram to the very top. The Trams originally used a steam engine to haul the cars but, thankfully, the whole thing was rebuilt 15 years ago, and it’s now got a computerized control system.
“So it’s perfectly safe?” asked Georgina, her eyes squeezed tightly shut.
“Yes,” I said. “It carries 11,000 passengers a day, and most of them travel with their eyes open.”
“I’ll be fine as long as it doesn’t stop, at a 45 degree angle, half way up the slope,” she said.
10 minutes later, the Tram stopped, at a 45 degree angle, half way up the slope.
“Can I get off now?” asked Georgina.
“When we get to the top,” I said.

It had been a while since we’d encountered any noisy road works or ear-splitting building work on our travels, so when we arrived at The Peak it was reassuring to hear the sound of pneumatic drills, electric saws and steam hammers. The normally quiet and tranquil gardens at the very top were being redeveloped, and the air was thick with dust, smoke and fumes.

My hands clamped over my ears, I approached a distinguished-looking Englishman, who looked like he could handle a camera.
“Lovely day!” I screamed at the top of my voice.
“Yes!” he shouted back.
“Would you mind taking a picture of us?” I yelled.
“I’d be delighted,” he hollered back.
I handed him the camera. I had found my photographer. The hard bit was now going to be getting Georgina to stand anywhere near the edge of the viewing platform, so that we could get the best possible picture of us in Hong Kong.
“No way,” she said. “I’m not going anywhere near that edge. That must be a thousand foot drop.”
“But there’s a handrail, and protective glass and everything” I said.
“I’m sorry, but no” she said.
“Just one,” I said.
“No.”
“You can keep your eyes closed,” I said.
“No!”
“I’ll give you five dollars.”
“Excuse me!” said the distinguished-looking Englishman. “Would you like me to take this photograph or not?” Using a combination of bribery, Valerian, and distorted perspective, we finally managed to take a photograph which made it look as if downtown Hong Kong and Sowerby and Luff were in roughly the same place at the same moment in history.