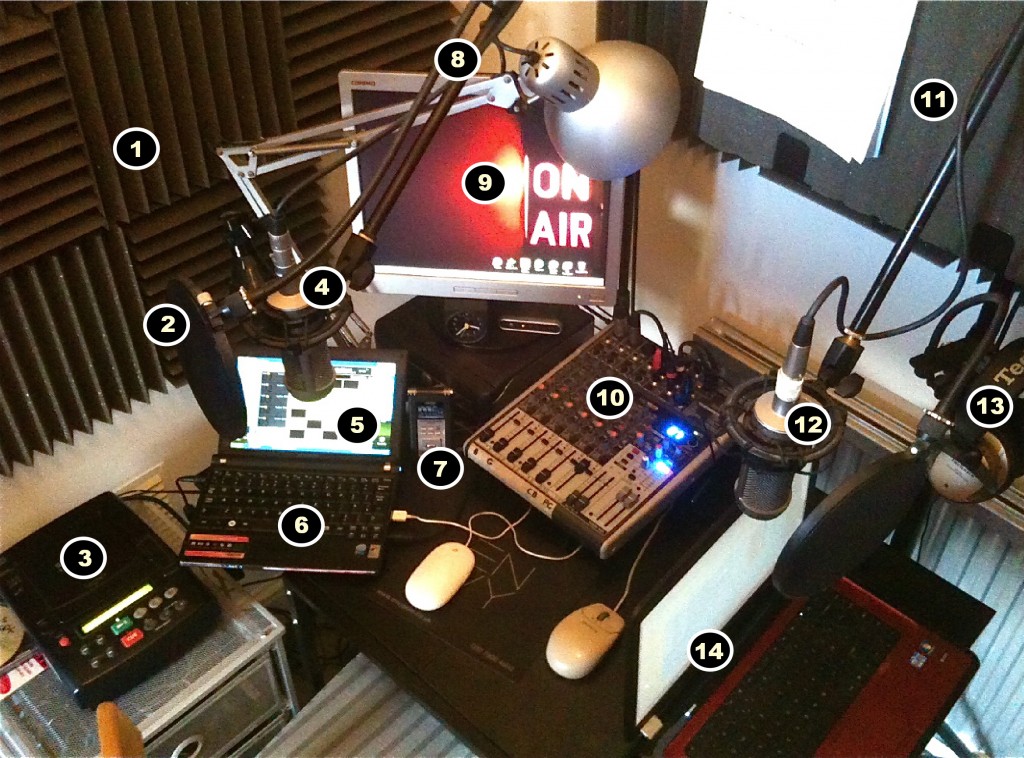 We’re often asked by new internet radio DJs and podcasters about the equipment and production techniques we use to make our programmes. Here’s a snap of our studio as it is currently configured with a list of the hardware and software we use. On this page you will also find a simplified summary of our production workflow.

Studio Configuration:
Our mixer has inputs for two microphones, CD deck and Notebook PC running Jazler software (for injecting MP3 idents and jingles). The mixer outputs everything as a single audio stream to our Roland Edirol R-09HR, which records the show as a high quality WAV file. If we play records we use software called RadioBoss on the laptop and connect it to a spare channel on the mixer.

Post Production:
The recorded WAV file is imported into a piece of audio software called Protools LE with MBox
Using this program the show is edited (if required) and re-mixed. The “raw ” audio is put through Protools plug-ins that add compression and equalization (EQ) in order to improve the original sound from the studio. The final treated audio is then exported from Protools.

Encoding:
The exported audio file is encoded into a format that can be uploaded to the internet as a podcast (MP3). This is done using the podcast application in Apple’s Garageband Software

Hosting:
The MP3 file is uploaded to our podcasting host Libsyn, where editorial information and metadata are added. The media is then released by Libsyn, and made available to multiple podcast aggregators via Feedburner

Distribution:
Feedburner generate an RSS feed which is submitted to iTunes and to other podcast distributors. This feed automatically updates every time we upload a new show to Libsyn. Go here to learn how to submit a podcast to iTunes 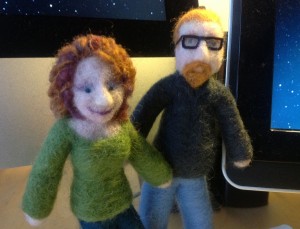 These lovely little needle felt G&B’s were sent to us by Karina Edwards. To find out more about Karina’s delightful arts and crafts visit Karikatzi.com

Perhaps the most stupid of all the regular features in our early podcasts was Name That Bird. But as we were finding out more and more, the more inane the item, the more popular it became. Every week, we’d simply play the same irritating, high-pitched sound effect of a bird, and Georgina would try and guess what it was.

From: Jake
Subject: Name That Bird
“This has been annoying me for quite some time, cause I think I know the bird! So every time it plays I’ve been yelling at my computer “It’s a seagull! A seagull damn it!” For to me that’s what it sounds like. It sounds like a baby seagull. But I could be wrong.”

This utterly pointless competition, with no prizes, ran for months and months. Gary from Colorado suggested it might be a cardinal. Daniel from Idaho reckoned a spotted thick-knee. Julian suggested the common drongo. In every podcast Georgina would dutifully read her way through seemingly never-ending lists of obscure bird names, sent in by our loyal regulars.

Dean suggested emu, dodo, ostrich, pelican and flamingo. Laura suggested avocet, fish eagle, reed cormorant, green pigeon, stilt, and white headed vulture. When Georgina finally guessed it was a plover, after months of trying, the aforementioned Julian was listening to us on his iPod while sitting his mock GCSEs. At the exact moment she “named that bird”, a plover was mentioned in his exam paper.  This extraordinary coincidence posed two important questions for Sowerby and Luff. One: What the hell were we doing with our lives? And two: What the fuck was Julian doing listening to an iPod while he was sitting his mock GCSEs? Even after the bird was finally guessed, the emails continued to flood in:

From: Paul
Subject: Name That Bird
“I haven’t caught up to the most recent episode yet, so don’t know if you’ve guessed that bird yet. But it could be a red-billed hornbill or a superb starling. Otherwise, there is another bird which nests on the ground and fakes injury to lead predators away from its nest. But I don’t know what it is called.”

Name that Bird was what many comedy writers like to call a repetition gag, and repetition is at the heart of a lot of the material we create for our podcasts. Audiences seem to love repetition, and I have absolutely no idea why. 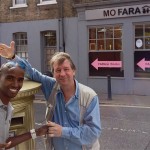 B&G’s technical wizard Bennsy was having his picture taken next to Mo Farah’s gold post box in Teddington this morning when the man himself appeared out of nowhere and jumped into the shot asking, “Can I be in the picture too?” Then he ran off. True story. What are the chances?

Gherkin disguised as a penguin. Plus, teaching fruit flies to count, 15th century underwired bras, no British beer at the Olympics, fun with an empty pill bottle, cavemen doing housework and a cow with its very own web site. May contain strong language.